I was born in Aguascalientes, Mexico, where I grew up as a cradle-Catholic. I am the middle child of three, having an older brother and a younger sister. Growing up I was an altar server for several years, and I envisioned myself becoming a medical doctor or an engineer when I grew up. I first entered the seminary when I came to Wichita State University back in 2008, and I went to Conception Seminary College where I earned my Bachelors Degree in Philosophy and Arts. In 2012, I was asked by Archbishop Naumann to apply for theological seminary at the Pontifical North American College in Rome, where I studied for 4 years, attending the Pontifical Gregorian University (Jesuit university), as well as the Patristicum Institute (Augustinianum). I obtained my theology degree and a Masters in Augustinian Studies and Spirituality during my time in Rome, I also began the course studies for the Canon Law Licenciate, which I intend to finish in the upcoming years. My time in Rome was very blessed and full of new experiences; I witnessed the “white smoke” that announced Pope Francis’ election, and I partook of the Year of Mercy while in Rome. I worked at the Vatican’s office known as the “Scavi” which is in charge of leading pilgrims and visitors through the archeological excavations underneath the Vatican where St. Peter’s tomb is found. I was ordained a transitional Deacon on October 1st, 2015 at St. Peter’s Basilica in Rome, by Cardinal Timothy Dolan of New York and I was ordained a priest on May 28th, 2016 at St. Peter’s Cathedral in KCK by Archbishop Naumann. My first assignment as a priest was at Prince of Peace in Olathe, where I served for 2 years, after which I was transferred to St. Patrick’s and Bishop Ward High School in KCK. I am elated to be joining the St. Paul community and I look forward to work with Fr. Michael and all of you this upcoming year. God bless! 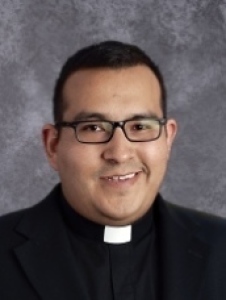